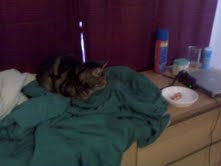 Tygana has been doing quite well with his Sub-Q's. We also got in his drinkwell 360 and it has definitely helped him to drink more, the first night I saw him stop at it at least twice and drink for literally 4 minutes.

So I think we have his fluids all set and ready. He has been having some stomach acid problems so he is on Pepcid AC.

Our big problem now is his appetite.
Poor little guy has barely been eating for days now, I've been keeping the vet up to date on this and today we were prescribed an appetite stimulant. Since taking it he's eaten some fancy feast not much but it's a start to me!

I ordered a baby scale so I can monitor his weight better.

Thank you so much for the purrs and grrs!

Hi kitties we love the support the CB offers! Thought we would give you an update.
Tygana got another blood panel ran on friday, I got a call from the vet yesterday afternoon.

His BUN levels went down but his creatinine went up, from 2.9 to 4.3 I believe.

The vet has suggested beginning him on calcitrol and sub-q fluids. So monday we are heading over there to pick up his supplies for the sub q's and learn to administer them and they are going to put in the order for calcitrol.

I know many kitties do wonderfully on sub-q's and they make a world of difference but I also know that not all cats are the same, so we are on edge here until we can see how he is going to do on them. Of course we pray for the best!

Until then we are just going to constantly refresh his water and try and tempt him to drink.
Can't wait for his Drinkwell 360 stainless to get in!
Posted by One Cats Nip at 27.3.11 10 comments:

How things are going for us

A couple weeks ago now I think Alex and I noticed Tygana running into walls we immediately got him an appt.

He has a partially detached retina most likely caused by high blood pressure.
He had been losing weight lately as well and they suspected hyperthyroidism.

We ran a blood panel on him and started him on blood pressure meds.

Tygana does not have hyperthyroidism but instead he has CRF (chronic renal failure) he is stage 3 if you are familiar with the stages.

So he is on a prescription diet (Hill's K/D) now which Pepper apparently loves, I just can't seem to keep him away from it!

We had a re-exam today and his blood pressure has gone down 100points, but it is still high we're hoping it goes down more.
Some of his sight has returned it's not perfect (well it hasnt been perfect in ages but better than no sight)
They also drew blood and going to run tests on his kidneys again and we are also going to have a urinalysis.

In other news Pepper is in fantastic health!

So if it wouldn't be too much to ask we are asking for your purrayers and thoughts that Tygana be as stable as possible for as long as possible. Because CRF cats can live happy lives too! We just don't want his numbers jumping!

Thanks everyone and we will try to keep you posted!

Also if any of you bloggers have CRF or have experience with a rainbow bridge kitty who had CRF we would love to hear from you!!
Posted by One Cats Nip at 25.3.11 20 comments: 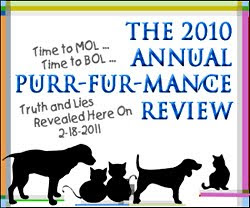